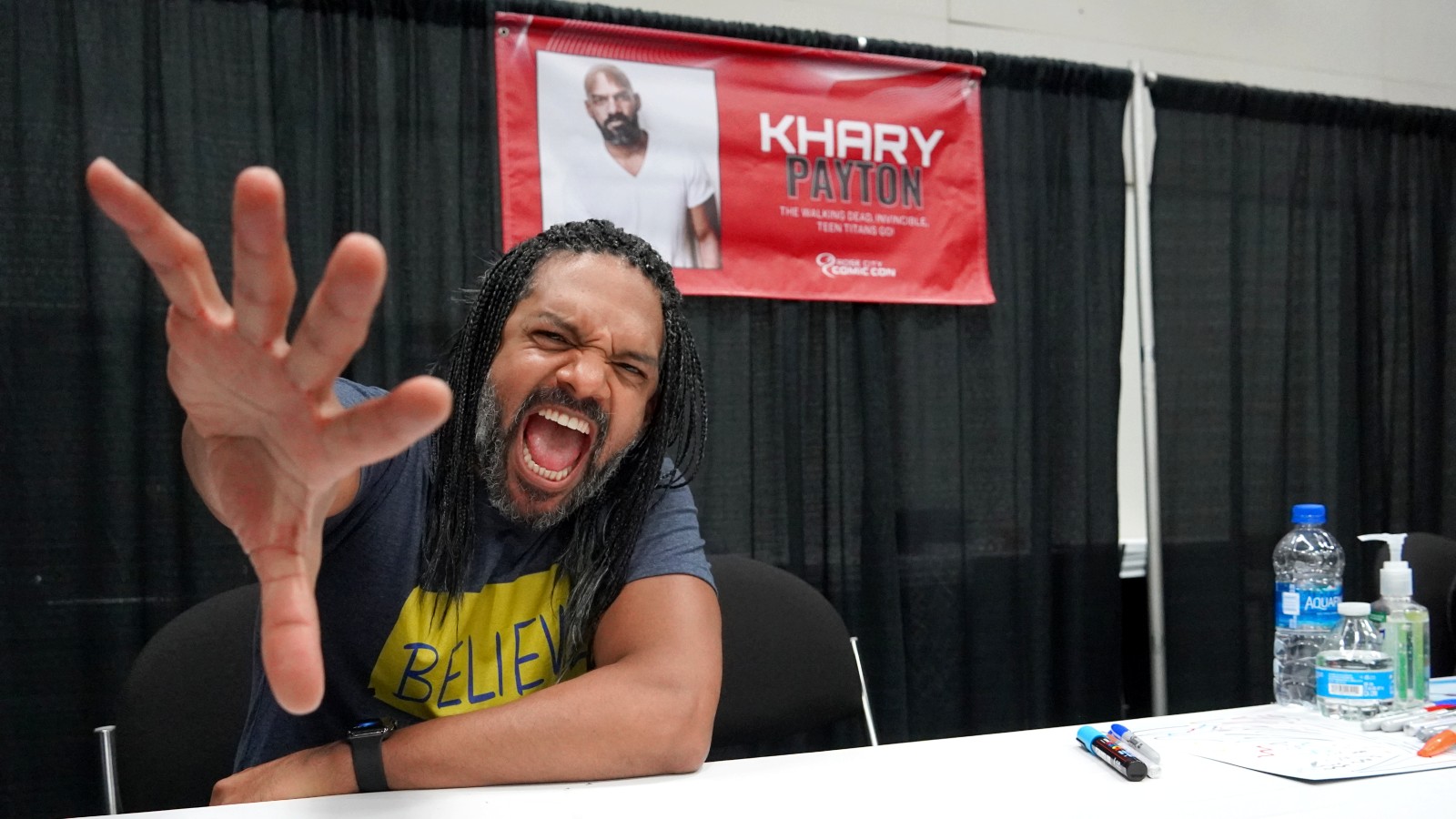 The Walking Dead and Invincible star Khary Payton explains why he feels like a “proud papa” for helping to bring DC’s Cyborg to life for many fans discovering the character for the first time in an exclusive interview with We Got This Covered.

While Payon might be best known today as King Ezekial in the zombie apocalypse drama The Walking Dead on AMC, pop culture fanatics of animated superhero shows and video games alike have probably heard the actor’s voice at some point, even if they didn’t realize it, since he boasts a career spanning decades that includes a prolific number of credits in popular franchises.

Most recently, Payton joined his fellow The Walking Dead co-star, Ross Marquand, who WGTC also interviewed, on another show from the comic book mind of Robert Kirkman, Amazon Prime Video’s Invincible. On that show, Payton plays the character Black Samson, a superhero who is a member of the Guardians of the Globe. Invincible has a second and third season already in the works, with the recording sessions for season three already underway, but season two is not expected to premiere on the streaming service until next year.

On The Walking Dead, Payton’s Ezekial has been a regular presence on the show since season seven. Although he’s a character who can hold his own in a battle, something that sets Ezekial apart from others in the show is his unrelenting optimism, despite a number of tragedies that have plagued his life. Most recently, Ezekial got a new lease on life when he overcame thyroid cancer thanks to a rare opportunity to receive medical treatment. The former zookeeper who once had a pet tiger, Shiva, in the post-apocalyptic landscape once known as the United States is part of just a community of survivors in a show famous for killing off beloved characters. Ezekial, like Marquand’s Aaron, will be part of The Walking Dead‘s final batch of episodes for its concluding season, which kicks off on AMC on Oct. 2. However, only time will tell if Ezekial or Aaron will survive the final stretch.

In addition to those newer characters you know, Payton continues to play DC’s Cyborg, as he has for the past two decades on various Cartoon Network shows, including Teen Titans and Teen Titans Go!, with his interpretation of the superhero arguably assisting in bringing more awareness to the character.

We caught up with Payton while he was in-between greeting fans at the recent Rose City Comic Con in Portland, Oregon, where he also co-hosted a panel with his co-star, Marquand.

There’re a lot of spinoffs coming — one with Andrew Lincoln’s Rick Grimes, one with Norman Reedus’ Daryl Dixon — and if the folks who are the showrunners of The Walking Dead ever asked you to come back onto a future show, what would be your reaction to that?

I’d be like, “sign me up.” I love Ezekial. You know. I feel like I got so lucky getting that part, and I would be more than happy to do it again. You know, so I’m putting it out into the universe, and we’ll see what happens.

Basically, you’re synonymous with that character for many. And I was wondering can you speak to the legacy of that character and how you feel about Cyborg?

I mean, he was my first voice-over audition. He was my first big job, really. And I’d done other things but nothing that caught on like Cyborg. And yeah, yeah, I feel so lucky. I feel like to watch the character grow and become part of the Justice League and be a part of the movies; it’s been really exciting for me. I feel kind of like a proud papa, you know. It wasn’t just me, but all of the other…[Cyborg co-creator] George Pérez, all of those guys who helped create Cyborg.

I feel like I was part of people learning about him and becoming a big part of the DC Universe. And yeah, it’s mind-blowing, you that there are kids now….when I was a kid, if you were a comic book fan, you knew who Cyborg was, but it wasn’t like a household name. And now, every kid knows Cyborg, and it’s kinda crazy that that’s the case. And yeah, we’ve been doing it for 20 years. It’s wild. It’s really crazy.

When was your first audition to play Cyborg?

It was in 2002. I went into Warner Bros. Animation, and a friend of mine got me the audition. And a couple of months later, he called me up, and he was like, “Dude, they’re talking about you like you might be one of the people they…is contending for the part.” And I just was hoping that they’d let me audition again; I never thought I’d get the part. And now here we are 20 years later; it’s crazy.

What was it like for you to see Cyborg in live action whenever the films came out [2017’s Justice League and 2021’s Zack Snyder’s Justice League]? ‘Cause I imagine you have a connection to that character.

Like I said, I feel like a proud papa because I think before the old Teen Titans show, they would’ve never gone that way. They might’ve gone with like Green Lantern or something like that. And I’m just amazed that Cyborg has gotten as popular as he has, you know? And it’s awesome to see.

Without giving any spoilers, I mean, what can you say to fans to get excited about seasons two and three of Invincible?

Well, I mean, it’s Robert Kirkman; he’s an absolute genius. I hate to say that about him, okay? ‘Cause I don’t like to give compliments to that dude. But he is an absolute genius; he’s an incredible storyteller and actually a very nice guy. And I’m just amazed at the stories that he creates. And Invincible is going to be amazing. If you were blown away by season one, season two and three are going to be awesome. I can’t wait for everybody to check it out.

You and Ross [Marquand] briefly talked about video games on stage, and I was wondering what other video game characters have you portrayed that fans might not realize?

This is a picture of me and some of the characters of video games that I’ve done (points to a photo)…I don’t know, it’s a lot (laughs). There’ve been a few. But I mean, I’ve been lucky enough to do a lot of…you know, be a part of the Batman Arkham series […] I played Killer Croc; I played Azrael. I played Metal Gear [Solid] 4 […] I’m Drebin. Drebin 893, yeah.

You were Drebin? Holy cow, man, I love those games.

Yeah, yeah. I’ve done a lot. It’s kinda weird, you know, to be like, “I’m not sure what you might’ve played because….throw a dart, see what hits, see what sticks.”

This interview has been edited and condensed for clarity.