Marsupilami The Secret of the Sarcophagus in 1st video, between DK Country, Sonic and Rayman 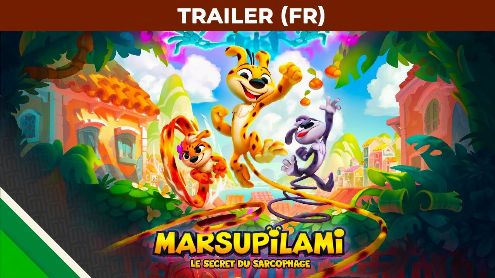 After the first unveils just a few weeks ago, Microds shows us this time the very first video of Marsupilami The Secret of the Sarcophagus, which seems to be a mix between Donkey Kong Country, Sonic and Rayman. A guarantee of quality?

With this video of about 1.30 minutes, it is obviously easy to start making comparisons with these three titles which are so emblematic of the legendary platform. Is it overkill? We will see it once we have the game in hand, that is to say very soon, since the title is still scheduled for next November. Here you won’t be playing with the famous mammal, but with three little ones named Punch, Twister and Hope.

From this first video, we can say that it seems to work in the best possible way, since the watch portions seem to attest to a rather eclectic title and quality. Obviously, it remains to head the beast to be definitively convinced of it.

Recall the pitch, for the most curious of you:

Punch, Twister and Hope are three Marsupilamis who lead a peaceful life in Palombia. As the Three Compresses open a cursed sarcophagus while playing with debris on a beach, they mistakenly release a mysterious ghost who casts a terrible curse on all animals. Fortunately for them, the Marsupilamis are immune. Our three heroes will have to go on an adventure and thus hunt the ghost in order to ward off fate.

As you know, the game is now developed by Lyonnais d’Ocellus, who were already in charge on Astrix & Oblix XXL Romastered, XXL 3 or even Clash of Clans.

Microds had also announced two collector versions of the title:

Already announced on Mac, PC, PS4, PS5, Switch, Xbox One and Xbox Series, Marsupilami: The Secret of the Sarcophagus will be released on November 16.